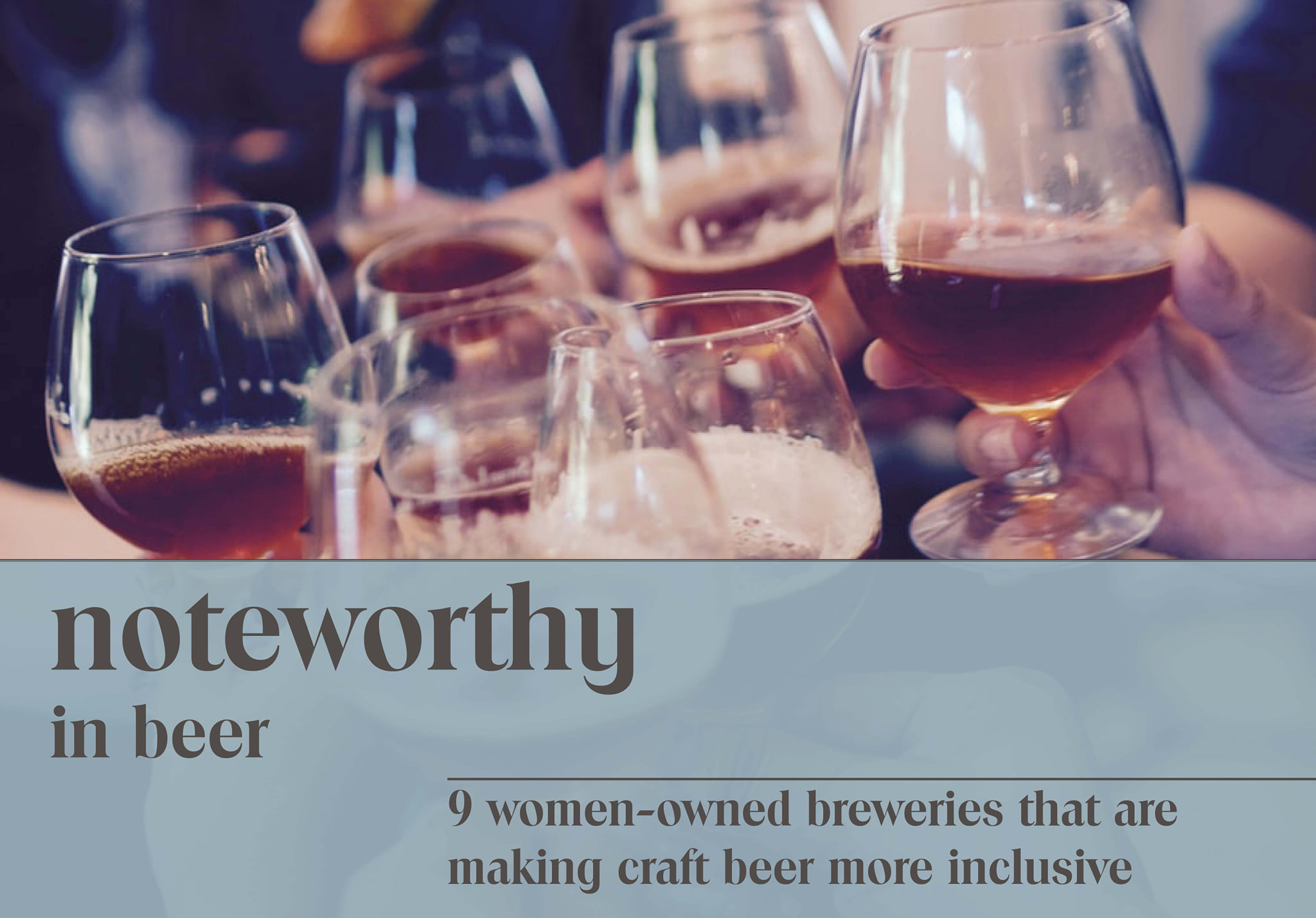 Craft beer is a male-dominated whitewashed industry. These women owned breweries are out to prove that beer is much more inclusive.

Think about the last time you were in a craft brewery taproom. Who served your beer? Who brewed your beer? Who owns the brewery? The chances are pretty likely that your bartender was a white guy. And there’s an even higher likelihood that the fella who brewed it was a white guy. And it’s a near certainty that the person or persons who own the brewery are white guys. After all, according to a 2014 Stanford University study, only 4% of all American brew masters were women, and women only represented 29% of all brewery workers.

EDITOR’S NOTE: This list is in no way exhaustive or comprehensive. It is merely a sliver of the great work women are doing in the craft beer industry. I’ve only selected a handful of some of the best, most interesting, and noteworthy women owned breweries. I also made an effort to be as diverse and inclusive as possible, featuring entrepreneurs of diverse backgrounds and ethnicities from various parts of the country. There are much more exhaustive resources out there that I encourage you to check out, like: Biere de Femme, and Pink Boots Society.

Brey and Anne Sloan are the mother-daughter duo behind Augusta, Georgia’s first craft brewer, Riverwatch Brewery. Brey is a retired Army colonel who spent 20 years mastering her craft, homebrewing, and studying brewing technology around the world before founding Riverwatch. Anne Sloan is a Marine Biologist turned brewer and Certified Cicerone.

During a trip to Korea in 2017, Carol Pak’s friends took her to a makgeolli bar. She was hesitant because makgeolli is often considered a grandpa drink (it’s Korea’s oldest alcoholic beverage, after all, dating to the 10th century). But it was a delicious experience and she fell in love with the Korean rice beer. So much so that she left her career with ZX Ventures and founded Makku – a craft makgeolli brewery that employs traditional brewing methods and all-natural ingredients. You can find Makku on the drink menus at notable spots such as Michelin-starred restaurant Jeju Noodle Bar in New York and chef David Chang’s Majordōmo in Los Angeles.

Lady Justice Brewing Company was founded by Betsy Lay, Kate Power, and Jen Cuesta after their service in AmeriCorps. Lady Justice Brewing is a community-focused brewery dedicating time, space, and money to nonprofits, community partners, and feminist groups that support and empower women and girls in Colorado.

Shyla Sheppard was born and raised on the Fort Berthold Reservation in North Dakota, where she is a member of the Three Affiliated Tribes, and went on to earn a degree in Economics from Stanford University. After years of investing in and supporting other entrepreneur’s dreams, she left her position with a social impact investing firm in late 2013 to found Bow and Arrow Brewing. The Albuquerque-based brewery now offers wild, sour, and barrel-aged beers inspired by the culture of the American Southwest and brewed with unique ingredients like blue corn, churros, and pineapple.

Liz Preston is a former microbial ecologist and environmental manager who turned her love of cooking, farming, and brewing into Prestonrose Farm and Brewing Company – an all-organic vegetable, fruit, and herb farm and nano-brewery in rural Paris, Arkansas,where Preston brews unique beers with ingredients grown on the farm.

Janell Zurchsmeide’s family has been farming in Loudoun County, Virginia for over 40 years. As the demand for hops grew in the Virginia craft beer scene, the family purchased 100 surrounding acres that is now home to Dirt Farm, where they grown their own grain, hops, and produce. Janell is the current and first female chair for the Virginia Craft Brewers Guild and manages the business.

Both avid homebrewers with MBAs, LeAnn Darland and Tara Hankinson left their corporate lives to launch TALEA Beer Company. They identified the craft beer industry was aggressively masculine and had overlooked consumers like them: women who love craft beer. TALEA casts a wide net for a broader audience with no-nonsense, easy-drinking, hoppy and fruit-forward beers.

A century ago, Harlem served as a cultural mecca for many Black writers, artists, musicians, and poets. To this day, Harlem holds cultural signifiance to the NYC Black community. It’s fitting that Celeste Beatty chose the neighborhood that was home to the Harlem Renaissance to launch Harlem Brewing, becoming the first Black woman to own a brewery in the US in the process.

There is one guiding principle that Samantha Lee pursued when she launched Hopewell Brewing Company in Chicago in 2016: authenticity. She brought her experience working in nonprofits for many years to the craft beer industry, making commitment to their workforce, their community, the environment, and inclusivity for both employees and clientele foundational to Hopewell’s culture.

Keeping Together is a unique nanobrewery project founded in Chicago by Master Cicerone Averie Swanson. Swanson specializes in mixed fermentation and is nationally renown for her work. While many craft breweries chase trends like pastry stouts and seltzers, Swanson pours all of her energy and efforts into thoughtful, limited-run saisons with mixed-culture fermentation.

Craft beer is exploding in popularity in Puerto Rico with breweries popping up all over the island. Pura Vida however, launched in 2018 by Rhaiza Casiano and Eileen Ruiz, is the first (and currently only) one that is women-owned and operated. The brewery is in idyllic Cabo Rojo, on the island’s southwestern coast – a location that’s perfect of embodying the brewery’s culture of “pure life.”

Andrew
Andrew is a husband, father, dog lover, craft beverage enthusiast, content creator, and niche market Internet celebrity. Formerly of A Table in the Corner of the Cafe and The Pulitzer Project and contributor to Barista Magazine and Mental Floss, he’s been writing on the Internet for years.