“I didn’t realize that one tragedy can beget another, and another — bright-eyed disasters flooding out of a death hole like bats out of a cave.” 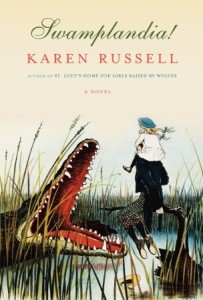 It took me over a year to finish Karen Russell’s debut novel, Swamplandia!. Over a whole calendar year. Granted, a whole hell of a lot happened in that time period; I was a pretty busy guy for most of it. My wife and I had our first child, we bought our first home, we moved to a new city, my job became much more demanding and involved… But, despite all of that, if one were to ask me why it took me so damn long to read a book that clocked in at less than 320 pages, my honest reply would be “Because that book wasn’t very good.”

Swamplandia! isn’t a terrible book, it’s true – but it’s a real mess. Which was really disappointing considering all of the great press the book received, and how wonderful of a writer Russell actually is (her short stories are outstanding). So where did Swamplandia! go wrong?

Perhaps it was the vacillating between genres from chapter to chapter (and, indeed, page to page). This novel seems less like a cohesive narrative and more like a patchwork quilt of disjointed stories and, throughout the book Russell can’t decide if she wants it to be Southern Gothic, contemporary, fantasy, or magical-realism – the general shift in tone from quirky, heartfelt family novel to weak magical-realism about ghosts and pseudo-mythology about the River Styx and the underworld?

Or perhaps it was the point at which the narrative branches off into two tracks, following the separate adventures of the protagonist’s wayward brother, where Russell suddenly switches between first and third person narration from chapter to chapter. (Or, perhaps she’s employing the rare first person omniscient narrator (in this case, Ava) throughout the whole book.)

Was it the inclusion of a play-within-the-play, suddenly covering the life story of a new character? Russell dedicates an entire chapter of her book to the life of Louis Thanksgiving – the ghost whom Osceola falls in love with, has sex with, and follows to the Underworld to marry.

Or did the real trouble begin at conception, when Karen Russell had the idea to expand one of her celebrated short stories (“Ava Wrestles the Alligator,” from St. Lucy’s Home for Girls Raised by Wolves) into a novel? The premise was promising – a family-owned roadside amusement show has fallen on hard-times since the passing of their star attraction, so the surviving family members take it upon themselves to save the business. And while that plot should have been engaging enough to last 300+ pages, it really took everything I had in me to maintain interest in the story.

The Pulitzer board declined awarding this book the Prize despite the selection jury nominating it as a top three finalist. Michael Cunningham – himself a past winner – was on that jury and, when the Pulitzer board elected not to award any book the Prize that year, wrote an open letter in the New Yorker addressing that controversial decision. He writes:

Karen Russell’s “Swamplandia!” was a first novel, and, like many first novels, it contained among its wonders certain narrative miscalculations—the occasional overreliance on endearingly quirky characters, certain scenes that should have been subtler. Was a Pulitzer a slightly excessive response to a fledgling effort?

However, it seemed very much like the initial appearance of an important writer, and its wonders were wonderful indeed. Other first novels, among them Harper Lee’s “To Kill a Mockingbird” and John Kennedy Toole’s “A Confederacy of Dunces,” have won the Pulitzer. One is not necessarily looking for perfection in a novel, or for the level of control that generally comes with more practice. One is looking, more than anything, for originality, authority, and verve, all of which “Swamplandia!” possessed in abundance.

Russell was unfocused, the writing wasn’t consistent, and the story wasn’t engaging. Sure, there were flashes of brilliance – when this promising young writer showed signs of great things to come later in her career; but, as a whole, the novel was a mess, and certainly not deserving of the 2012 Pulitzer Prize for Fiction.

Andrew
Andrew is a husband, father, dog lover, craft beverage enthusiast, content creator, and niche market Internet celebrity. Formerly of A Table in the Corner of the Cafe and The Pulitzer Project and contributor to Barista Magazine and Mental Floss, he’s been writing on the Internet for years.
childhoodfamily