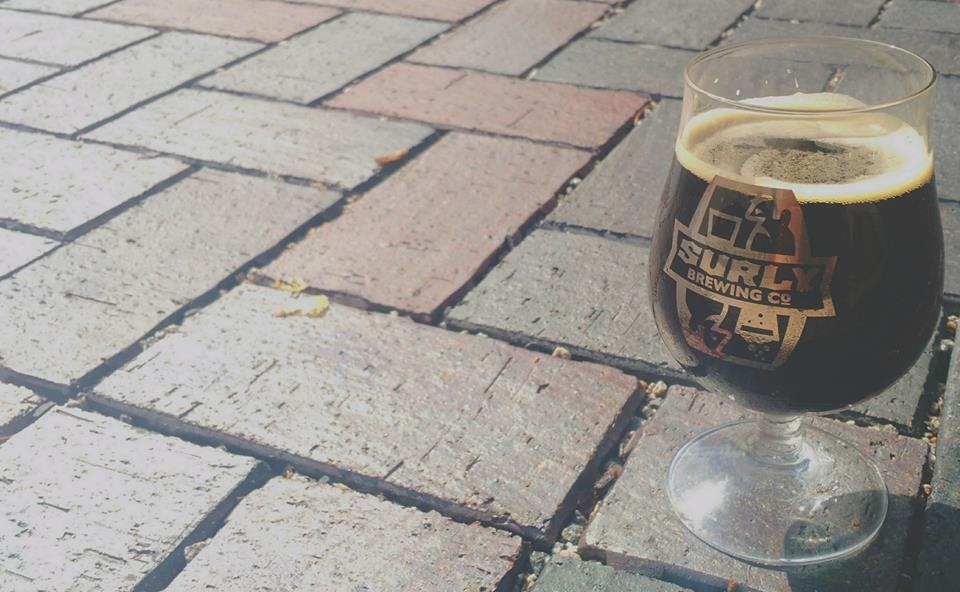 While I couldn’t find much about the background history of this beer, what went into making it, or the relationship between the brewery and the roastery, there really aren’t any huge secrets in the brewing world when it comes to combining coffee and beer. Some breweries still employ the outdated method of adding coffee grounds directly into the boil and some just pour cold-brewed coffee into the beer either during fermentation or bottling, the process known as “cold toddy” has been proven to work best when it comes to adding coffee flavor to beers.

Brewers will typically steep the grounds (or, in some cases, whole beans) in the cold liquor for 24-48 hours, letting the water take on the rich coffee aroma and flavor, and it is then blended with the beer.

Todd Haug, of Surly Brewing Company, says he uses a similar method, but adds the coffee to his bright tanks, for a 24-hour period. “We’re making cold-pressed coffee, but instead of water, we’re using beer,” he says. The coffee he used for Surly Coffee Bender comes from Guatemala’s famous Finca Vista Hermosa.

Finca Vista Hermosa (or, “Farm of the Beautiul View”) represents a legacy of three generations of coffee lovers who have poured their hearts into the rich land of Huehuetenango, Guatemala. Because it is situated in the highlands, Huehuetenango coffees are among the more coveted coffees of altitude from Guatemala. The family plantation is located in Agua Dulce, Huehuetenango in northwest Guatemala.

Finca Vista Hermosa is ecologically sound and healthy, a model for many shade grown and organic plantations. Finca Vista Hermosa runs a good model for being both environmentally and socially responsible for a farm in the region, as they don’t use any herbicides, pesticides or fungicides.

Welcome to my Table, here in the corner of this cafe. Today we’re sipping the Surly Coffee Bender—a collaboration from Minneapolis’s Surly Brewing Company and Coffee and Tea Limited. Feel free to pull up a chair.

No surprise, the first thing to leap out after a hard pour of the Surly Coffee Bender is an intensely coffee-forward nose. While the coffee aroma is fairly generic, there are some traces of the Finca Vista Hermosa to be found: specifically cocoa and dark fruits (think berries, plum, raisin) (though, the berry nuance is very, very, very mild). The beer is also presenting scents of brown sugar, oatmeal, hops, toasted malts, roasted nuts, and graham cracker.

Visually, the beer pours a deep, dark brown with a slightly reddish hue around the edges. It has a pretty thick (almost an inch) tan-colored head which recedes at a moderate pace, and its retention and lacing are both quite good.

This beer isn’t a porter or a stout—the most common vehicles for coffee-infused beers; it’s actually an oatmeal brown ale, which means it has a relatively light, creamy body—towards the lighter side of a medium body. I think the coffee is what adds a little bit of heft that isn’t in their regular Oatmeal Brown Ale variant. That brown ale base shines through in the flavor profile—it’s sweet (brown sugar, vanilla, cocoa) and possesses a sturdy backbone of toasted malts, oats, and almond. Where Surly Coffee Bender diverges from its predecessor is in its presentation of, obviously, roasted coffee. Bitter, dark-roasted coffee that all but totally masks the brown ale base. And the beer continues with that profile of roasty, toasty, bittersweetness before arriving at a curveball: hops. Spicy, floral, crisp, citric hops a-plenty, thanks to the Columbus and Willamette hops Surly used.

There are plain brown ales, and then there are flavor infused brown ales. Sometimes it’s nice to drink a traditional, straight up brown ale, and know it can stand on its own merits. And then there are those brown ales that enhance your imbibery with the addition of chocolate or coffee. Surly Coffee Bender is the epitome of the latter.

Coffee Bender’s dark roast not only delivers a powerful and robust flavor, but it is also surprisingly crisp and refreshing for such a dark ale. It possesses a fairly light body and goes down easy, each sip concluding with a long, lingering finish. But the beer is loaded with too much coffee (coffee that’s too darkly roasted, to boot). The brown ale base comes through in the flavor profile, but it is concealed by the smokiness of the dark roast, which which makes for an unbalanced drinking experience. While the beer is light and crisp, and while the base ale’s flavor is sugary sweet, Surly Coffee Bender is too bitter to be enjoyable. Which is a real bummer, because it has so many other positive things going for it.

Perhaps if Surly paired up with Spyhouse, Five Watt, or Dogwood, and utilized a coffee that was more properly roasted, Coffee Bender would be a much more pleasurable beer. As it stands, it’s an interesting take on an old classic while still suffering from outdated roasting practices.

Andrew
Andrew is a husband, father, dog lover, craft beverage enthusiast, content creator, and niche market Internet celebrity. Formerly of A Table in the Corner of the Cafe and The Pulitzer Project and contributor to Barista Magazine and Mental Floss, he’s been writing on the Internet for years.
Finca Vista HermosaGuatemalaHuehuetenangoMinneapolisMinnesotaPeace CoffeeSurly Brewing