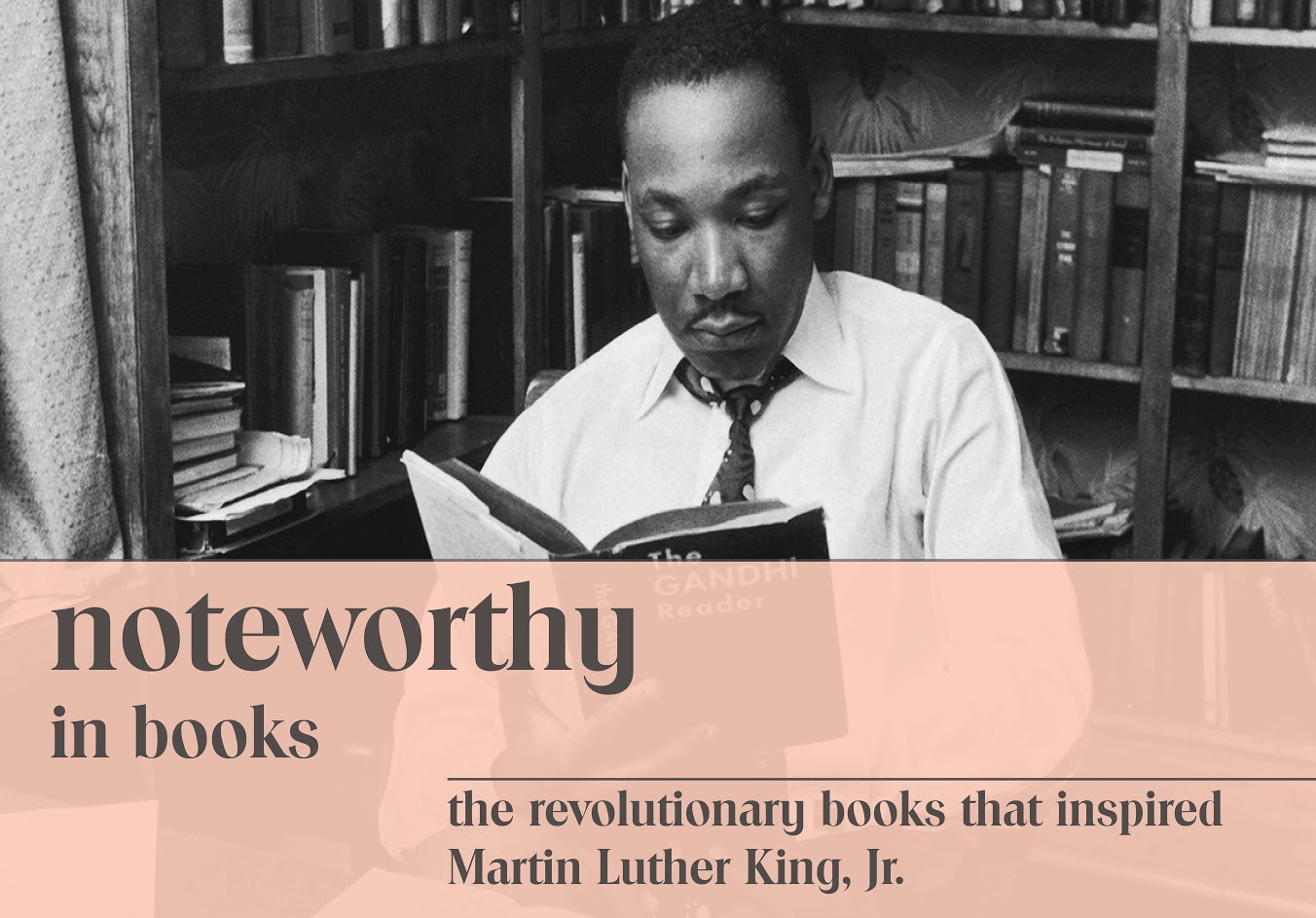 Education without morals is like a ship without a compass, merely wandering nowhere.

Martin Luther King, Jr. was the pioneering force of the American Civil Rights movement until his assassination in 1968. He was a prolific Baptist preacher who espoused the teachings ideals of Christ. But he was also a book lover and collector with a massive home library, and he was heavily influenced by the writings of Gandhi, Eastern philosophy, American transcendentalists, and political revolutionaries. He kept the company of various prominent literary figures of the time – King counted James Baldwin and Langston Hughes as friends, organized protests with the help of Maya Angelou, and had tributes written to his enduring legacy by Alice Walker, Angela Davis and Gwendolyn Brooks. Today, in celebration of his birthday, check out some of the revolutionary works that were Martin Luther King’s favorite books.

The Gandhi Reader – Howard A. Jack

Then one Sunday afternoon I traveled to Philadelphia to hear a sermon by Dr. Mordecai Johnson, president of Howard University.  He was there to preach for the Fellowship House of Philadelphia. Dr. Johnson had just returned from a trip to India, and to my great interest. He spoke of the life and teachings of Mahatma Gandhi. His message was so profound and electrifying that I left the meeting and bought a half-dozen books on Gandhi’s life and works. Like most people, I had heard of Gandhi, but I had never studied him seriously. As I read I became deeply fascinated by his campaigns of nonviolent resistance. I was particularly moved by the Salt March to the Sea and his numerous fasts. The whole concept of “Satyagraha” (Satya is truth which equals love, agraha is force; “Satyagraha,” therefore, means truth-force or love force) was profoundly significant to me. As I delved deeper into the philosophy of Gandhi my skepticism concerning the power of love gradually diminished, and I came to see for the first time its potency in the area of social reform.  Prior to reading Gandhi, I had about concluded that the ethics of Jesus were only effective in individual relationship.  The “turn the other cheek” philosophy and the “love your enemies” philosophy were only valid, I felt when individuals were in conflict with other individuals; when racial groups and nations were in conflict a more realistic approach seemed necessary.  But after reading Gandhi, I saw how utterly mistaken I was. Gandhi was probably the first person in history to lift the love ethic of Jesus above mere interaction between individuals to a powerful and effective social force on a large scale. Love for Gandhi was a potent instrument for social and collective transformation. It was in this Gandhian emphasis on love and nonviolence that I discovered the method for social reform that I had been seeking for do many months. The intellectual and moral satisfaction that I failed to gain from the utilitarianism of Bentham and Mill, the revolutionary methods of Marx and Lenin, the social contracts theory of Hobbes, the “back to nature” optimism of Rousseau, and the superman philosophy of Nietzsce. I found in the nonviolent resistance philosophy of Gandhi. I came to feel that this was the only morally and practically sound method open to oppressed people in their struggle for freedom.

In his 1836 novel, Hyperion: A Romance, Henry Wadsworth Longfellow writes, “Never mind trifles. In this world a man must either be anvil or hammer.” King echoed these words in a speech to the staff of the Southern Christian Leadership Conference:

Violence has been the inseparable twin of materialism—the hallmark of its grandeur. This is the one thing about modern civilization that I do not want to imitate. Humanity is waiting for something other than a blind imitation of the past. If we want truly to advance a step further, if we want to turn over the new leaf and really set a new man afoot, we must begin to turn mankind away from the long and desolate night of violence. May it not be that the new man the world needs is the non-violent man? Longfellow said: “In this world a man must either be an anvil or the hammer.” We must be hammers shaping a new society rather than anvils molded by the old. This not only will make us new men but will give us a new kind of power. It will not be Lord Acton’s image of power that tends to corrupt, the absolute power that corrupts absolutely. It will be power infused with love and justice that will change dark yesterdays into bright tomorrows. I must say to each of you that I have made my decision.

Martin Luther King, Jr. in a speech to the staff of the Southern Christian Leadership Conference

King directly quoted James Russell’s Lowell’s 1845 work, “The Present Crisis,” in his “We Shall Overcome” speech: “We shall overcome because James Russell Lowell is right: ‘Truth forever on the scaffold, Wrong forever on the throne; Yet that scaffold sways the future, and, behind the dim unknown, standeth God within the shadow, keeping watch above his own.’” “The Present Crisis” also served as the inspiration for the NAACP’s main publication, The Crisis.

American transcendentalist Henry David Thoreau advocated active disobedience to unjust laws; he argued that one should not allow the government to overrule their conscience. King once wrote of Thoreau, “During my student days I read Henry David Thoreau’s essay ‘On Civil Disobedience’ for the first time. Here, in this courageous New Englander’s refusal to pay his taxes and his choice of jail rather than support a war that would spread slavery’s territory into Mexico, I made my first contact with the theory of nonviolent resistance. Fascinated by the idea of refusing to cooperate with an evil system, I was so deeply moved that I reread the work several times.”

Thomas Carlyle’s massive three-volume work “The French Revolution” is considered to be the authoritative account of the Revolution that combines epic poetry with philosophical treatise, exuberant story-telling with scrupulous attention to historical fact. In this, Carlyle saw morality, truth, and justice in the great events in history, and King referenced the work often, saying, “We shall overcome, because Carlyle is right, ‘No lie can live forever.'”

In addition to being a pioneering figure in the American Civil Rights movement, Martin Luther King was a staunch advocate for workers’ rights and labor reform. In 1968 he organized the Poor People’s Campaign – an effort to gain economic justice for poor people. He referenced Henry George’s seminal book Progress and Poverty in support of aid and universal basic income.

Jean-Jacques Rousseau’s “The Social Contract” helped inspire political reforms all over 1700s Europe. Rousseau proposed that everyone would be free by giving up the same amount of rights and the same responsibilities would be imposed on everyone. And to explain what he means by a social contract, he summarizes, “Each one of us puts into the community his person and all his powers under the supreme direction of the general will; and as a body, we incorporate every member as an indivisible part of the whole.” Each person is making a contract with the state. As a united body, what harms one person, harms the whole. This is an idea that King indirectly referenced in his “Letter from Birmingham Jail:” “We are all caught in an inescapable network of mutuality, tied into a single garment of destiny, whatever affects one directly, affect all indirectly.”

On March 31, 1968, Martin Luther King preached his last Sunday sermon at the National Cathedral. Entitled “Remaining Awake Through a Great Revolution,” King references Washington Irving’s “Rip Van Winkle,” the famous story about a man who goes to sleep while King George III rules the colonies and wakes up in a new world where George Washington is President: saying: “The most striking thing about the story of Rip Van Winkle is not merely that Rip slept twenty years, but that he slept through a revolution.” King continued in this speech, “All too many people find themselves living amid a great period of social change, and yet they fail to develop the new attitudes, the new mental responses, that the new situation demands. They end up sleeping through a revolution.”

King was heavily influenced by John Donne’s poems, particularly “No Man Is an Island.” Speaking at Grosse Point High School, Dr. King quoted Donne in saying, “‘No man is an island.'”  Donne was an English poet who wrote around the turn of the 17th century.   King explained the context, his inspiration: “The tide that fills every man is a piece of the continent, a part of the main. And [Donne] goes on toward the end to say, ‘any man’s death diminishes me because I’m involved in mankind. Therefore, it’s not to know for whom the bell tolls, it tolls for thee.’ Somehow we must come to see that in this pluralistic, interrelated society we are all tied together in a single garment of destiny, caught in an inescapable network of mutuality.”