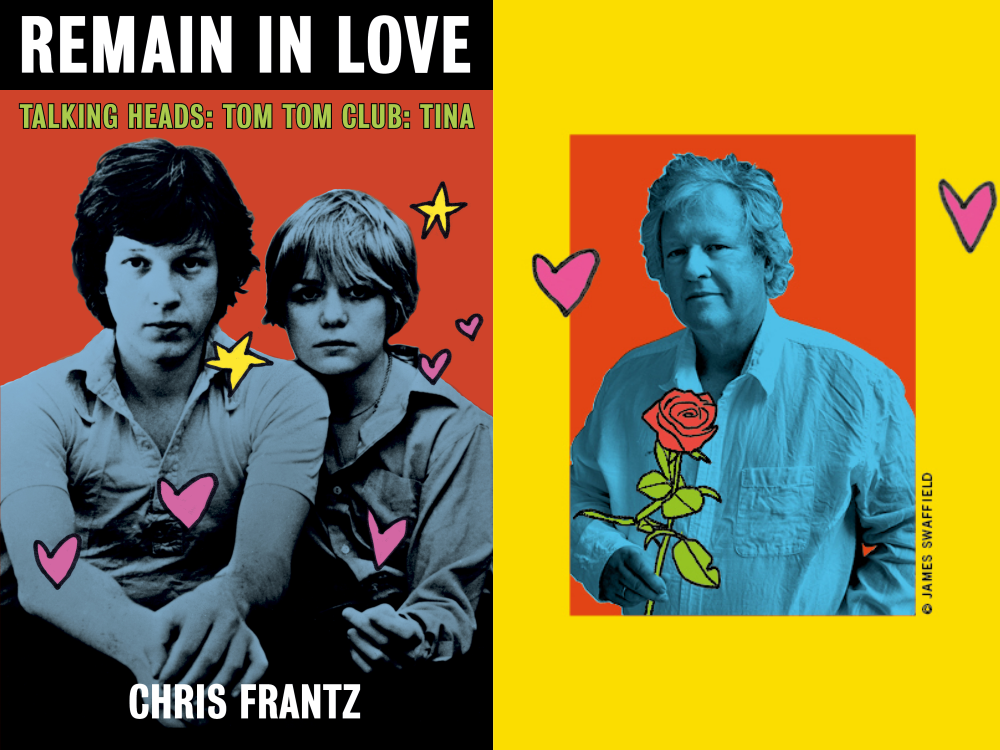 “When people say, ‘It’s time to move on,’ I am not down with that. When speaking about my family, my friends, and my band, I am not a person who ‘moves on.’ I remain – and I remain in love.” – Remain In Love, Chris Frantz

Chris Frantz is a very lucky man. He attended a prestigious art school where he met the love of his life (Tina Weymouth); with her, he formed two iconic bands of the 1970s and 80s (Talking Heads and Tom Tom Club); he lived out his rock and roll fantasy; achieved international fame and acclaim from critics, punks, and mainstream audiences alike; was enshrined in the Rock & Roll Hall of Fame; and raised a beautiful family, all while not burning out, fading into obscurity, or becoming a hackneyed legacy act.

Frantz details his life and times in his new memoir, Remain In Love, published by St. Martin’s Publishing Group.

Frantz starts his memoir at the very beginning, describing his early days in Kentucky and Pittsburgh. The son of an Army lawyer and a housewife, Frantz grew up living a privileged, Waspy life – free from trouble and hardship. He fell in love with music at an early age – soul, rhythm and blues, and rock and roll – and spent his teenage years jamming with friends and playing in local bands. After high school, he enrolled at the Rhode Island School of Design. Soon thereafter, he met fellow student and artist, Tina Weymouth, with whom he immediately swooned over and would later marry.

It’s not all sunshine, though, as the memoir unfurls. The poster-boy nice guy of the late 1970s punk rock scene, who was more known for joyfully sweating and smiling behind his drum kit, showcases more of a snarl when detailing his fraught relationship with Talking Heads frontman, David Byrne. “You could say that Tina and I were the team who made David Byrne famous,” Frantz writes in the book’s preface. And, from there, he continues to tell the reader how he really feels, pulling no punches and airing some dirty laundry.

The source of the animosity lies in Byrne’s apparent need for attention, adulation, and credit for other’s work. While each member of the band contributed lyrics and wrote music – especially in the early days of the band – it was Byrne alone who would take and receive credit; even, Frantz alleges, going out of his way to have other names expunged from album liner notes just before artwork went to print. These actions eventually led to the media treating Byrne as the golden goose. He was the perceived star, and Jerry Harrison, Weymouth, and Frantz were merely his backing band.

Really, setting the record straight on the band being a collaborative unit was Frantz’s impetus for writing the memoir. In an interview with the Chicago Tribune, Frantz said, “Mostly, what I wanted to convey was that Talking Heads was a shared experience. People think there was one genius in Talking Heads. But, no, there was an entire team of geniuses…”

In some ways, the memoir reads as an indictment on Byrne. There is no shortage of accusations thrown his way. But this is not the memoir of a whiny, embittered drummer who has an axe to grind with the lead singer. He lays out his story, presents his arguments, and leaves it at that. That being said, I don’t want to get too much into the weeds on David Byrne because that’s been the main focus of every other review written about this memoir; many of which retell these accusations beat for beat.

Overall, Remain In Love is a celebration of his career, the music he loves and that which inspired him, the achievements of his bands, and, most of all, his love for and life with Tina Weymouth. His love and admiration for his wife comes through on every page. Even after 40+ years of marriage, he is still truly enamored with her. On the very first page, her husband describes her “looking exceptionally fine in a dress she made herself, a strapless white sheath with a slit on the side all the way up to the top of her thigh.” The text highlights her “great sense of style” as she never fails “to add some extra beauty to our group.” Her legs? “Fabulous.” Unable to restrain himself toward the end, Frantz exclaims, “Tina is by my side, working on her book and still looking very beautiful. . . . How I adore her!”

In term of style, well – there are certainly better written rock ‘n’ roll memoirs. Bob Dylan’s Chronicles comes to mind. Frantz’s prose is undeniably unpoetic, but these are the failings of his editor.

Frantz spends half his memoir detailing his upbringing and college career in exquisite detail, and then merely glosses over the next 40 or so years. There is a famous spat between Tom Tom Club and Adrian Belew over songwriting credits on their 1982 album that was a pretty big deal, for example, but Frantz glossed over it quickly in a sentence or two and summarizes the conflict by merely writing “cool.” There are also huge gaps in his timeline – from Talking Heads’s dissolution in 1991 to their Rock and Roll Hall of Fame induction in 2002, and from there on. Some details are omitted completely. Frantz doesn’t even mention No Talking Just Head – the 1996 project that Byrne sued Harrison, Weymouth, and Frantz over. And for as much heart as Franz shares in these pages, there’s a lack of emotion for readers to connect with.

This book presents just the facts as Frantz sees them.

What were your thoughts of this one? What are your favorite rock ‘n’ roll memoirs? Comments, questions, and suggestions are always welcome! Contact me, or enter a comment below.

Andrew
Andrew is a husband, father, dog lover, craft beverage enthusiast, content creator, and niche market Internet celebrity. Formerly of A Table in the Corner of the Cafe and The Pulitzer Project and contributor to Barista Magazine and Mental Floss, he’s been writing on the Internet for years.
memoirTalking Heads