“Willie experienced the strange sensations of the first days of a new captain: a shrinking of his personal identiy, and a stretching out of his nerve ends to all the spaces and machinery of the ship. He was less free than before. He developed the apprehensive listening ears of a young mother; the ears listened on in his sleep; he never quite slept, not the way he had before.” 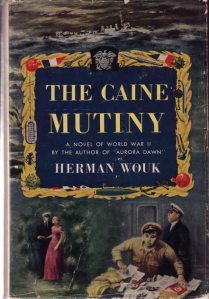 There must something very fulfilling about being military personnel; whether it be a soldier or an officer. The military must instill a certain sense of accomplishment and personal growth in somebody. Or, you know, it will beat you down, chew you up, and spit you out, leaving you as an empty husk of a person.

At least those seem to be the lesson that Herman Wouk wanted to teach with his 1952 Pulitzer-winning novel, The Caine Mutiny.

At the beginning of this novel, Willie Keith is an upper-crust, high-class, playboy/prep with boyish good looks, a full pocketbook, a head full of dreams, and an incredible amount of naïveté who joins the Navy simply so he won’t get drafted by the Army for World War II. By the conclusion, he is a fully-developed, weathered, mature, respectable, and experienced man. All of the pages in between document Willie’s journey from one end of the spectrum to the other.

Captain Queeg, on the other hand, is a seasoned Navy officer who demands respect, exhibits professionalism, and inspires his people in the beginning and becomes an empty shell of the man he once was, stripped of his ship, his people, and all his pride by the end. And the pages in between document his great fall.

Three stories are told throughout this book: Willie’s, Queeg’s, and that of the crew who mutiny and, more or less, end where they began. And each of these stories is very well told by their author, Herman Wouk.

Let’s get one thing straight—this wasn’t a very challenging book to read. It tells a complicated story, but it is simply told and very straightforward. And this is something I really, really, relaly appreciated. Because, yes, this is a very complicated story with a lot of very complicated plot lines; the characters are so rich, dynamic, complex, and fully developed; Wouk was a Navy-man and, as such, his writing and descriptions of battle sequences and individual parts of the USS Caine are so specific.

However, despite the complexity of all the contents of this novel, it is a very easy, straightforward, uncomplicated, and (most importantly) enjoyable read. It doesn’t get bogged down in prose, it’s not overly-poetic, and Wouk never over-writes anything (except maybe the “Willie’s journey from boy to man” theme); there is a whole lot of depth in this novel, but Wouk always keeps his head above water.

On Goodreads, I really wrestled between giving The Caine Mutiny four or five stars, but I decided on four and here’s why: even though Wouk is a really good writer, even though his characters are fantastically and fully developed, and even though this story is very genuinely interesting and engaging, Wouk was guilty of one thing that absolutely drives me crazy in literature: the author being way too obvious and preachy.

Throughout the whole book, Wouk really wants us to see Willie’s growth, from naive playboy to respectable, mature man. And he does this in a variety of ways: with the book’s main plot, a sub-plot involving his romantic relationship, and a sub-plot involving his family (specifically, his mother). For nearly 500 pages, Wouk drags his readers through this and I would have forgiven it—I did forgive and overlook it for a long time!—, but he really pushed me over the edge with this one line on page 461:

“With the smoke of the dead sailor’s cigar wreathing around him, Willie passed to thinking about death and life and and luck and God. Philosophers are at home with such thoughts, perhaps, but for other people it is actual torture when these concepts—not the words, the realities—break through the crust of daily occurrences and grip the soul. A half hour of such racking meditation can change the ways of a lifetime. Willie Keith crushing the stub in the ashtray was not the Willie who had lit the cigar. That boy was gone for good.”

My goodness. Herman Wouk wrote the shit out of that. And it was the one time he was guilty of doing so in the entire book. But this one time was particularly damning because of the final line: “That boy was gone for good.” Rather than just let his readers deduce from his words or actions that Willie Keith finally matured and “became a man,” Wouk had to really drive it into their brains.

Other than that one section, though, The Caine Mutiny is a really tremendous book that I would absolutely recommend to anybody interested in World War II, the military, or historical fiction.

Andrew
Andrew is a husband, father, dog lover, craft beverage enthusiast, content creator, and niche market Internet celebrity. Formerly of A Table in the Corner of the Cafe and The Pulitzer Project and contributor to Barista Magazine and Mental Floss, he’s been writing on the Internet for years.
war novelsWWII