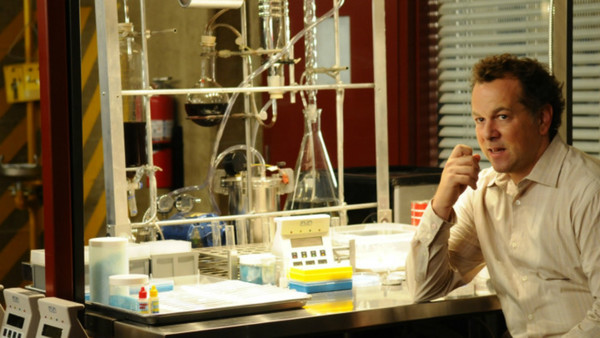 The day has finally come—Breaking Bad is back. After a year of suspense, everybody’s favorite meth-cooking high school chemistry teacher is back. I’ve been binging the past seasons to prepare for episode 1. I was watching episode 603—”Sunset”—in which Gale Boetticher unveils the Breaking Bad Coffee Maker:

If you didn’t recognize it, Gale essentially built, for all intents and purposes, a siphon filter. There’s a more specific name for it than the one Gale came up with, though—the Florence Siphon. Of course, being an incredibly geeky chemist, there shouldn’t be any doubt that Gale would go above and beyond what is absolutely necessary to make a great cup of coffee, but he didn’t need that entire set up—he could’ve bought a siphon filter online, after all.

That, though, would have been much less entertaining for us viewers.

I recently ran across this a blog called Weak Interactions, where the blogger explains science the way it is portrayed on screen—sort of like a “myth busters” type of thing I guess. He investigates whether or not Hollywood science is the equivalent of real-life science. I found this entry about the “Sunset” episode of Breaking Bad and the Breaking Bad coffee maker and thought it was really interesting:

Gale’s perfect coffee equipment looks to be a fairly overcomplicated vacuum reflux/distillation set-up, which is not currently under vacuum (there is no pump running, and a reflux condenser is not sealed into its flask). His quinic acid theory, however, is sound – it is known to contribute to the bitterness/acidity of coffee, but there are many other contributing factors.

Boiling a chemical under a mild vacuum is a common method of distilling or refluxing without strong heating, especially for things like water that have a relatively high boiling point. For the water to boil at 92 °C, the pressure would have to be about 0.75 bar (normal atmospheric pressure is 1 bar), which is roughly equivalent to an elevation of 2440 m, which can be experienced at the summit of El Capitan.

While I find it hard to believe that a cup of Sumatra, in 2010 or ’11, was the best cup of coffee Walter White had ever had (then again, maybe it was; I guess it depends what he drank before), I love this scene. And it’s not just because I love this show, and I love the music in this scene, and I love David Costabile (I even liked him when he was doing those cell phone commercials) and Bryan Cranston as actors; but also because of how well it promoted the specialty coffee industry.

In one fell swoop, Vince Gilligan and the writers of Breaking Bad did more positive promotion for the specialty coffee industry than baristas often do!

And I don’t mean it’s just because Breaking Bad has an insanely large viewing audience, but watch the way Gale interacts with Walt in this scene: he’s very humble and gentle and takes his time explaining the process, explaining how to taste the coffee, explaining how this process positively affects the coffee in the cup, even tagging on the importance of proper grinding!

It’s absolutely incredible how much like a barista Gale acts in this scene.

And, of course, Walter White, who is clearly the more intelligent and talented chemist of the two, instantly becomes a believer. Throughout the rest of season three and into season four, in fact, Walter only drinks coffee that he makes with the siphon filter. It’s a shame that there’s no deleted scene of Walt going home and destroying his drip brewer or Keurig K-Cup machine…

It’s a beautiful scene that every barista should take note of while watching.

Andrew
Andrew is a husband, father, dog lover, craft beverage enthusiast, content creator, and niche market Internet celebrity. Formerly of A Table in the Corner of the Cafe and The Pulitzer Project and contributor to Barista Magazine and Mental Floss, he’s been writing on the Internet for years.
brewing methodstelevision