(EDITOR’S NOTE: Remember, the beers in this list are only beers that I had in 2015; it is a highly subjective list and is in no way meant to be authoritative or comprehensive.)

Last year, Goose Island and Intelligentsia created one of the best coffee-infused beers I had ever tasted. Their 2014 BCCS was nothing short of a revelation—a beer that had just as much as thought and effort put into the coffee component as the base beer; one that proved there was room for innovation within a traditional style.

Goose Island’s 2015 Bourbon County Coffee Stout was further experimentation within the style, going with a coffee that featured a lighter profile than its 2014 predecessor. In 2014, this beer used a Rwandan coffee—one that featured a full body and heavy flavors (like dark chocolate and dark berries); this year’s BCCS used a Nicaraguan coffee that had a bit of a lighter body and flavors (caramel, nuts, and red berries).

Another way the 2015 Bourbon County Coffee Stout separates itself from its predecessor is its complexity, which the 2014 release didn’t really have. Last year’s release was all about sugary sweetness and toasted malts—pretty standard for a coffee stout; the 2015 BCCS is more nuanced (not just with its toffee/caramel and red berry flavors, but also with those herbal and vegetal notes that just aren’t often found in stouts; especially not coffee stouts).

Having said all that, it is now time for me to speak my final piece. I’m normally a huge fan of this beer; I am not a fan of thisbeer. It’s way too peppery, and that is not something I’m looking for in a stout, and especially not in this stout. The 2015 BCCS tastes like a diluted version of the base BCBS and is a huge step backwards from last year’s release (which might well be the best coffee stout I’ve ever tasted).

(EDITOR’S NOTE 01.09.16: After reading the many negative reviews regarding the 2015 BCCS, Goose Island is now offering refunds. Turns out the beer wasn’t supposed to taste like green peppers after all. This makes me wonder if Intelligentsia accidentally sent them a Pacamara instead of the Bourbons and Caturras from Los Delirios.)

Hmmm… Well. I’m not exactly sure what to make Local Option and Dark Matter Coffee’s Mourning Wood. It’s a bunch of very tasty weirdness. Not unlike beer, I guess, but also not very much like beer.

It’s an amber ale, so you can’t go into it expecting a big body or over the top flavors. I can say this for it, though: it’s a very solid offering from Local Option—particularly in light of its being such an experimental brew.

It’s well-balanced, it’s flavorful, it’s mellow, and it has some interesting nuances. Not sure you can ask for much more from an amber ale, albeit experimental.

Well, I don’t really know what to say here. I didn’t know what to expect when I first heard about Goose Island Beer Company’s Fulton Street Blend, and I’m not so sure I fully understand it even after drinking it.

It was a golden ale, and it had coffee infused with it. It was a golden coffee ale. It was novel and interesting—a lightly creamy mouthfeel and a healthy dose of carbonation with a crisp, clean finish. It was an extremely drinkable and tasty beer with a decidedly coffee flavor. Was session coffee beer a thing? If not, it is now.

Overall, the Espresso Oak Aged Yeti Imperial Stout, from Great Divide Brewing, was a really great glass of beer. The standard Yeti was passable, the chocolate oak version was good, the espresso variety is great—it did have a few aspects that I found lacking, though.

The beer’s flavor profile was amazing, but its biggest downfall was its texture. I really think it could have benefited from a denser, fuller body; for what this beer is purporting to be, it was just a little too thin for my liking.

Again, though, that didn’t necessarily detract from the overall profile—I’m just being hypercritical.

“Yodo,” in Costa Rica, is a slang term for coffee—as in something strong and dark. Well, that certainly fits the bill, here.

5 Rabbit Cerveceria’s Yodo Con Leche is a full-bodied, moderately boozy, and incredibly flavorful imperial porter. And, unlike most other coffee-infused porters and stouts, Yodo Con Leche is so decadent, so sweet, and is almost entirely lacking in bitterness. This is a tremendous beer for food-pairing, too, because it goes with just about everything from savory steak and pork dishes, to spicy Asian vegetarian meals, to sweet desserts.

Yodo Con Leche is just about as close perfection as a coffee-infused beer can get. Truly, it’s one of the most memorable porters I’ve had in a very long time. 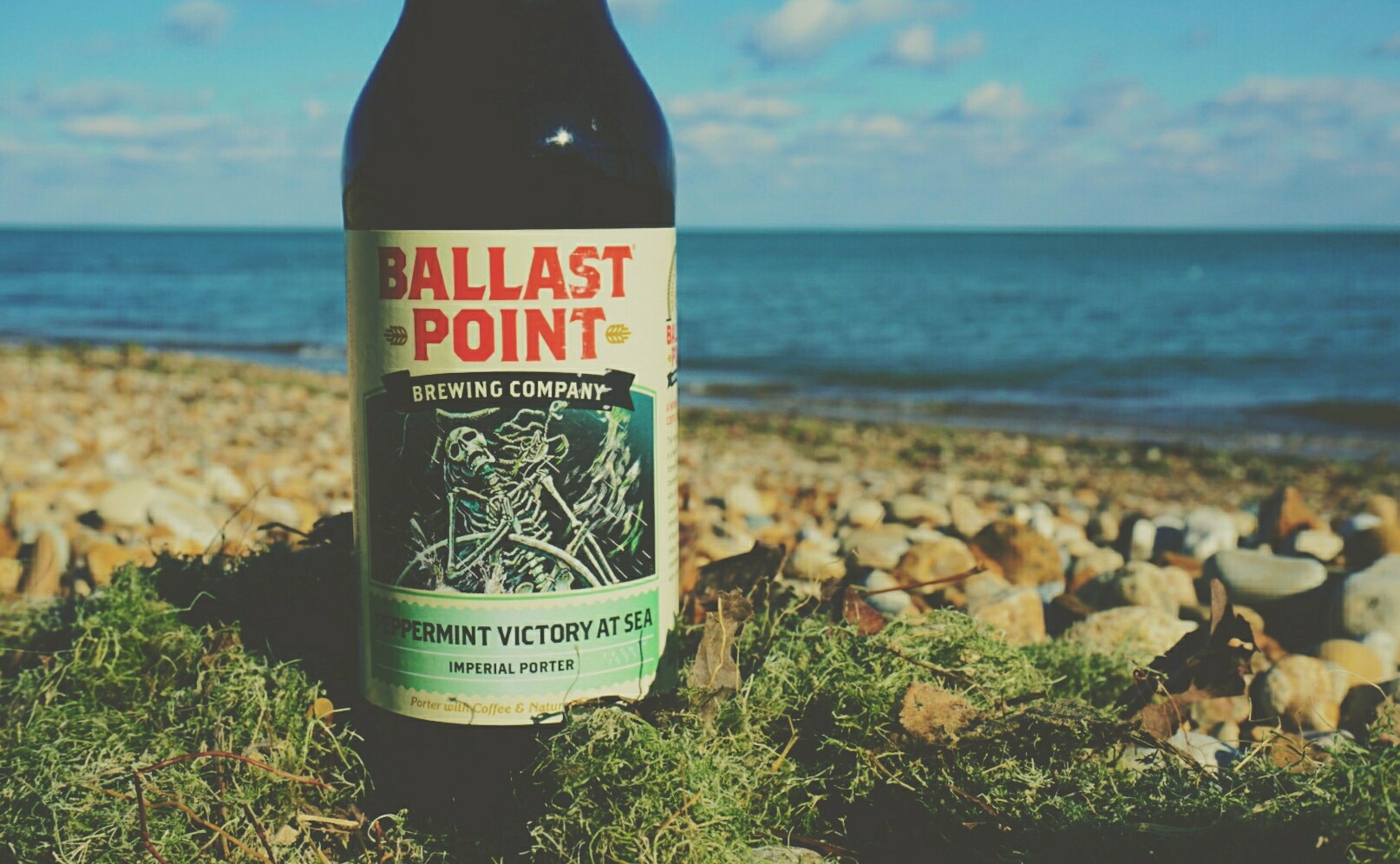 Ballast Point Brewing Company’s Victory at Sea Imperial Porter is, very likely, the best coffee-infused stout or porter on the market. It’s certainly the best this reviewer has tasted.

The Peppermint Victory at Sea variant is a fun, festive take on the original Imperial Porter, and is almost every bit as delicious as the base beer. The trio of flavors in this beer—vanilla, coffee, and peppermint—are all perfect complements of each other and play on the palate as a cohesive whole. The brew’s roasted coffee, malts, and barley provide a sturdy backbone for its sugary sweet chocolate, vanilla, and peppermint components and it all balances nicely with a cool, minty finish.

Even though this beer isn’t technically a “holiday beer” or even a seasonal release, necessarily, Ballast Point’s Peppermint Victory at Sea Imperial Porter is a divine and festive addition to the holiday season.

Dragon’s Milk is one of my all-time favorite beers. Whenever I visit family in Holland, we go to New Holland Brewing and I make sure to have a glass. That beer tastes even better around the time of year—when a crisp chill is in the air, the leaves are changing their colors, and the witching season is upon us… Dragon’s Milk is the perfect complement to the Halloween season. When I learned that New Holland would be releasing a coffee variant just in time for Halloween, I was overcome with excitement. I just knew that it would become my favorite beer of all time.

Unfortunately, it didn’t quite live up to the hype that I put on it. And that was probably my own fault.

Don’t get me wrong, the “Indulgence” variant of Dragon’s Milk Reserve is a fine beer—a very tasty beer, in fact. What kills me, though, is that, as good as it is, it could have been better; and I very strongly suspect the coffee might have been to blame. Simpatico Coffee brands themselves as the no/low-acid alternative to specialty coffee but, without its acidity (and with its being so roasty), the coffee made this beer way too one-dimensional. I can appreciate that New Holland wanted to shop locally for the coffee component, but heading up to Grand Rapids and using a lighter-roasted coffee from Ferris, Madcap, or Rowster—one with lots of berry and citrus tones—could have made this beer exponentially tastier and far more interesting.

While I’m at it, my only other complaint is that I wish all four Dragon’s Milk Reserve variants were either available individually or in one mixed 4-pack so I could sample all of them without going broke. Alas.

As I said, though, “Indulgence” is very tasty and a fun twist on an old classic.

If you want to know what to expect going in, the hint is in the title—it’s heavy, warming, comfortable, and familiar, but a bit rough around the edges.

We’re seeing a lot of progress and diversity, lately, in the ways that coffee beers are approached. Most of these beers, traditionally, have been stouts and porters but now we’re seeing all sorts of styles that infuse coffee. Even within the traditional heavy styles we’re seeing diversity in how the coffee is infused. Traditionally, for example, the coffee is cold-brewed then mixed in with the beer. With Brickstone and Dark Matter’s Dark Secret Imperial Stout, on the other hand, we found the brew master aging the brewed beer with with the roasted coffee beans in it, simply extracting the flavor essence of the beans out of them.

It was a strategy that really worked, as this beer was phenomenal; one that I really enjoyed sipping on these cold winter nights. It’s perfectly full-bodied, sugary sweet, and roasty—really nice as a dessert beer—but it also has that woody spiciness that keeps it interesting and complex.

Not surprisingly, the Beverage Testing Institute also loved this beer, awarding it with a score of 92/100 and a Gold medal in the Stout, Porters, and Strong Ales competition held last month.

(EDITOR’S NOTE: To fully understand this summary, it’s important to put the whole review in context. Check it out by clicking the hyperlinked title above the picture).

Before I share my final thoughts on the GFY Coffee Stout, I want to first thank a few people: Zak Rye at Gaslight—thanks for the coffee samples; Calvin and Jason at Spiteful—thanks for being so helpful and accommodating; Tommy and Jorge of the Few Brews Beer Club—thanks for having me on your podcast!

This deconstruction is something I’ve been wanting to do for a while now, and I don’t think I could have picked a better coffee beer to do it with than this one. It was a fascinating exercise to taste the two components come together and diverge in the final product. My only complaint about the GFY Coffee Stout was its body and mouthfeel; it tasted great, I just wish it had more density and a lot less carbonation.

I honestly wasn’t expecting much from this beer, but I was surprised to find that Big Red Tugboat was incredible. What this beer got right wasn’t just its flavor, though; its balance was absolutely spot on. It’s a very hoppy and citrus-heavy IPA, and the coffee element acts as a backbone to support it.

I experienced the Graveyard Shift Coffee Pale Ale in three stages: 1) this beer is weird and it makes me feel weird and I don’t like it; 2) you know, this beer is a very complex and interesting experiment in coffee-infused beer brewing; 3) this beer is freaking delicious. The first few sips were—I’ll admit it—unappealing. But as I sipped on it more, the flavors developed and this beer really grew on me.

It’s different, it’s weird, it’s unorthodox, and it’s pretty damn good. No frills, no gimmicks. Just a very unique collaborative offering from two of the most different, weirdest, most unorthodox craft beverage producers in the City of Chicago.

I’m just going to get right to the point: Ballast Point Brewing Company and Caffe Calabria’s Victory at Sea Imperial Porter is, very likely, the best traditionally coffee-infused beer on the market (“traditional” meaning a stout or porter). It’s certainly the best this reviewer has tasted.

Most coffee stouts/porters are pretty simplistic in a way—you get the coffee and the chocolate and the barley notes, and that just about does it. Ballast Point has done a very strong job here in incorporating some more complex flavors. It takes the standard flavor of a porter – which, really, has become something of a pigeonhole term – and expands upon them, adding elements of complexity to the style while maintaining a lovely simplicity.

This one goes so far above and beyond the standard porter that it belongs in its own world.